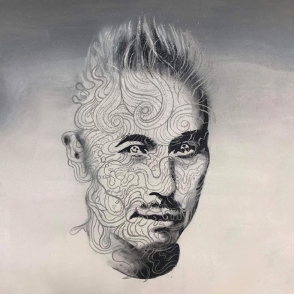 Shinichi Hara is one of Asia’s leading contemporary artists and has been active for 35 years.
In 1985, he held SIX/FIVE/TWO/GALLERY, his first solo exhibition, in Los Angeles. The exhibition was praised by David Hockney.

He went on to produce the logo icon and all digital hero images for the singer Ayumi Hamazaki. Including his work for other musicians, he has shared 100 million such images with the world.
This is Shinichi Hara’s first attempt at NFT art.

Hara’s comment: “Art is a form produced by humans from natural energies that have existed for millennia. In the 21st century, humans have succeeded in taking that analog energy and converting it into a systematic form that is the same everywhere in the world. This is the world of the digital.

2019-2020: Assumed position as Creative Director for the “Connect & Hope for World Peace” (Official Program to Support the Tokyo 2020 Olympic and Paralympic Games)

2019-2021: Finalized the 1000-Year Project
The project features the dedication of folding screens to four major temples in Nara that have stood for over 1000 years (Saidai-ji, Murō-ji, Kinpusen-ji, and Shigisan Chogosonshi-ji).

2007: Robot Award from the Ministry of Economy, Trade and Industry.
The music robot “MIURO” became a familiar favorite of the Prime Minister of Japan, and was gifted to presidents of foreign countries.